On the verge of our return home, I just have to spend a bit of time reflection on my and Jeff’s anniversary trip to Lyon. This kind of adventure has long been a dream of mine, but it was just that…a dream…not something I thought would actually happen. And so it is from a place of deep gratitude that I reflect.

Instead of going in chronological order, I think in order of impact suits this post…so that I might capture first that which was most meaningful versus just first.

This requires to start with Le Puy en Valey. We rented a car for our journey a couple of hours outside the city of Lyon, and wound our way to the East and South through the French countryside. It was beautifully dotted with mountains and valley and bridges strung across them.

Following the trusty gps, we entered what we would discover to be the backside of Le Puy. We felt like we were entering a ghost town with few people, confusing road signs, and steep winding cobblestone roads. In short, we felt lost. Could this really be the place? The sacred starting place of the Camino de Santiago? I’ll confess I googled it a few times to make sure we hadn’t made some kind of wrong turn…or that there weren’t two Le Puys. But this was right. And after wandering a bit, we found confirmation.

After our long drive, a bathroom was in order, and we wandered through an open door and past some signage we couldn’t read. We saw WC marked on a map of the building, and made our way there. In the foyer, we found some maps that made mention of the Camino. (We would later found out we had wandered into a private dormitory of some type, but were grateful for it at the time!) 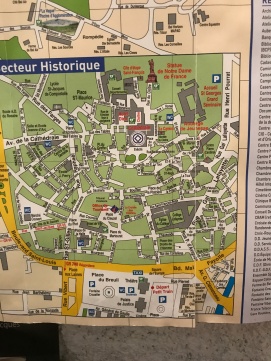 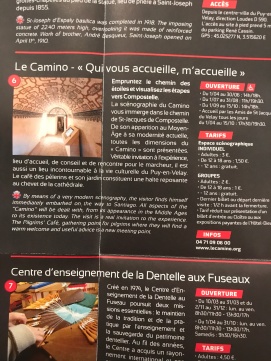 We then wandered into the strangest museum. For 4€ we got little tablets that gave us English explanations of these strange testimonies of the Camino. What made it so strange, was that there was very little information about the Camino, its history, how Le Puy ended up a starting point, etc…instead, it was just people talking in these very airy, ethereal voices about finding peace in the solitude etc. The exhibits were like some projections on the wall and a few statues as you wound through this old castle-type structure. So very peculiar!

However, it did point us toward the cathedral where pilgrims are blessed before starting their journey. Where we felt confident we could sniff out the trail of the Camino. Here is where they began, and we anticipated finding signs or other indications of where the pilgrims went from there, and experiencing some small part of the Camino ourselves.

Up the steps to the cathedral 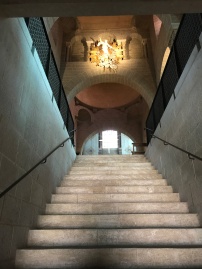 Up the steps to the cathedral

down the steps of the cathedral 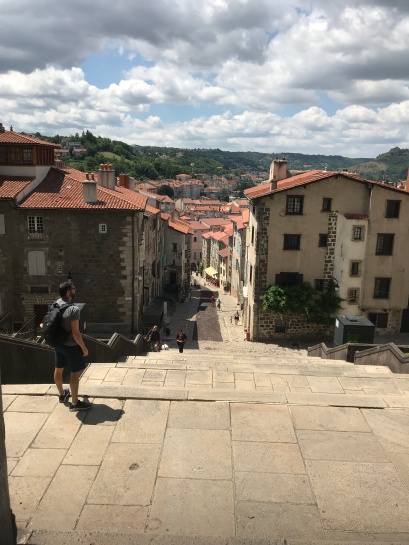 down the steps into town

from the town below

We wandered through the little town at the foot of the cathedral certain the way would reveal itself. We picked up some provisions (a sandwich and a quiche) from a little bakery and kept looking for some kind of sign.

We eventually turned to google with little result and were nearly ready to give up. When low and behold, one little link on a website marked out the path from the cathedral to the trail. Huzah! We drove up some little road to the edge of town, and there it was! 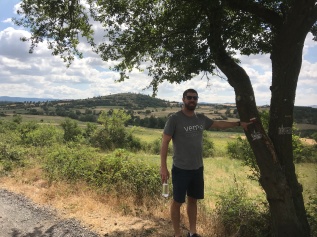 An abundance of signs indicating the path! At long last, we’d found confirmation that the path was in fact there with a bit of searching, googling, and perseverance. We’d finally found the place where thousands (if not more) pilgrims began their journey toward St. James final resting place. The journey where people found themselves in rolling hills and long walks over dusty paths. The journey where people were transformed through pilgrimage. And it didn’t disappoint. It was everything I’d hoped it would be…even in our microcosm of the journey. 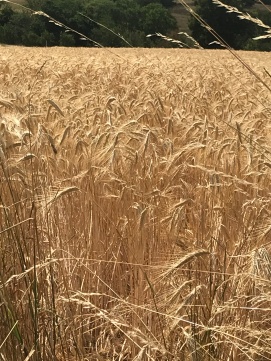 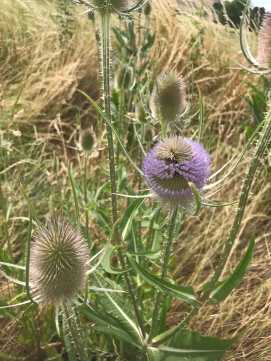 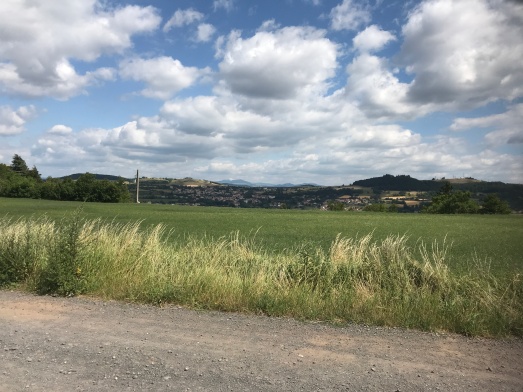 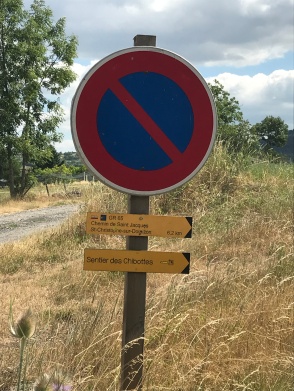 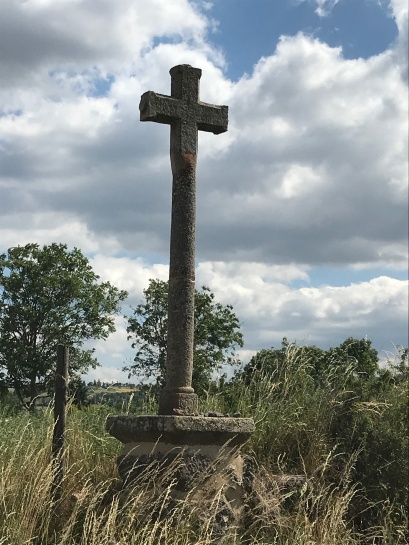 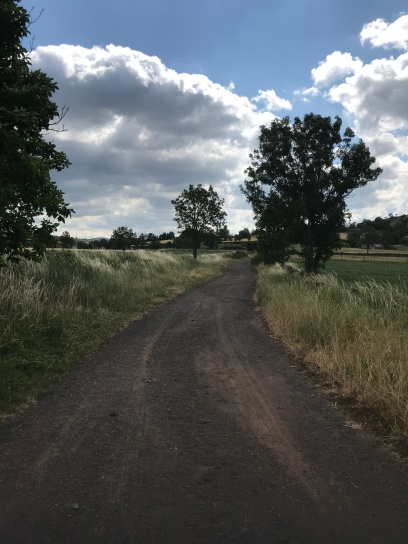 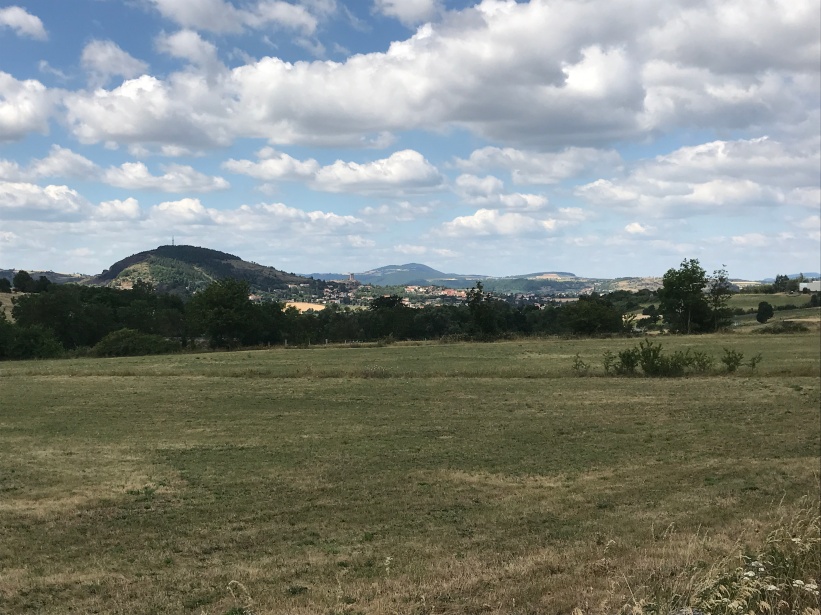 Sweeping vistas. Sign posts along the way. Ancient crosses where people left stone offerings announcing their beginning, their hope for a life altering walk. Just a walk…is there anything more simple? One foot in front of the other. And somehow, with just that, with just one step and then another, people find themselves and find God. It was an honor to place my feet on this ancient path along with so many other pilgrims…I hope one day to take the full journey.

The impact of this excursion captured a larger narrative in my current life. The feeling of looking for a path, a holy path, not well marked, hard to find. But it wasn’t in the longing, in the searching, in the feeling of being un prepared, or wishing I knew something I didn’t yet know…it was in the one foot in front of the other. Our little adventure was perfect, it had everything…strange little museums and major cathedrals and at last the Camino itself…I couldn’t have scripted it better than that. But in the midst of it, I was anxious and frustrated. Where are the signs? Shouldn’t this be easier to find? How will we know the path when we see it? Are we wasting time here? Where is all the information?

My journey is one that isn’t well marked. Many have walked it before, but this one is mine and will be unique. And it won’t be mine in less I do the daunting work of discovering it. No one said it would be easy, instead, they said keep going and have faith. You have been on the right path all along. Just don’t let the anxieties and frustrations, the questions and lack of information, stop you from continuing to explore, discover, and eventually find the way…your way.

We ventured back to Lyon, city of food and history, laughing at Siri’s efforts to pronounce the French city’s and road names, only bickering mildly when we struggled to find the car return. And over, yet another, amazing dinner, we recounted our life changing adventure and all the years that lead to it. So very grateful.